Thanks to all participants, presenters, and partners of the music conference in Roskilde. This photo was shot on the last day in snowy weather. 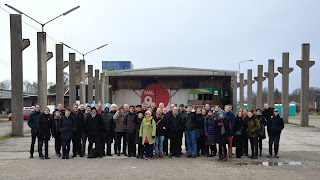 POPULAR MUSIC AND THE NORDIC REGION IN GLOBAL DYNAMICS

Posted by Unknown at 1:45 AM No comments:

A conference to be held at the University of Roskilde in Denmark
November 29-30, 2012

Organized jointly by
--The Nordic branch of the International Association for the Study of Popular Music (IASPM)
--"Popular Music in the Nordic Countries in the Early 21st Century," a cross-sector project funded by the Nordic Culture Fund

We are happy to invite proposals for entire sessions as well as for individual presentations for the 2012 IASPM-Norden conference. We welcome all topics related to the study of popular music, yet a specific emphasis in the conference is given to the politics of location of popular music in the Nordic countries.

Music is intimately tied together with conceptualisations of geographical locations and by extension identities. Differences may be thought of as existing between continents (eg. African, Latin, Western), regions (eg. Middle-Eastern, Balkan, Caribbean, Siberian) and especially nations (eg. all the world). Transnational populations and movements further complicate the issue: questions about Sámi or Kurd music imply their own politics of location, as do the ways in which regional, national or local identities are constructed musically in diasporic communities. To this quagmire one can add also the impact and significance of global mediated representations of given musical locales, regions and civilisations.

Nordic countries—Denmark, Faroe Islands, Greenland, Finland, Iceland, Norway, and Sweden—constitute their own region that is officially maintained through various treaties and organisations. In terms of international politics, the region has been characterised as a buffer zone between the East and the West. Societally, the region has been unified by welfare policies, and culturally the Arctic proximity has yielded speculations of a distinct Nordic mentality and forms of communication. These extend also to music.

The official conference language is English.

Please deliver the proposals as electronic mail attachments in rtf/doc/pdf format to iaspmnorden2012proposals@gmail.com no later than 1 June 2012. Please label your attachment as surname.xxx (eg. holt.doc).

Please direct all inquiries to iaspmnorden@gmail.com.

Welcome to Roskilde in November 2012!

Welcome to the blog for the project Nordic Popular Music: Music, Identity, and Social Change in the Early 21st Century

The project is about contemporary popular music culture in the Nordic countries. The goal for the project is to produce an academic book, a series of radio and television shows, and exhibit artifacts and documents digitally.

The overall project directors are Antti-Ville Kärjä and Fabian Holt.

As of January 2012, the project partners are:

The National Broadcasting Corporation of Denmark
The Danish Museum of Rock History
The Finnish Jazz & Pop Archive
The International Assiociation for the Study of Popular Music, Nordic Branch

The project is supported by the Nordic Culture Fund.